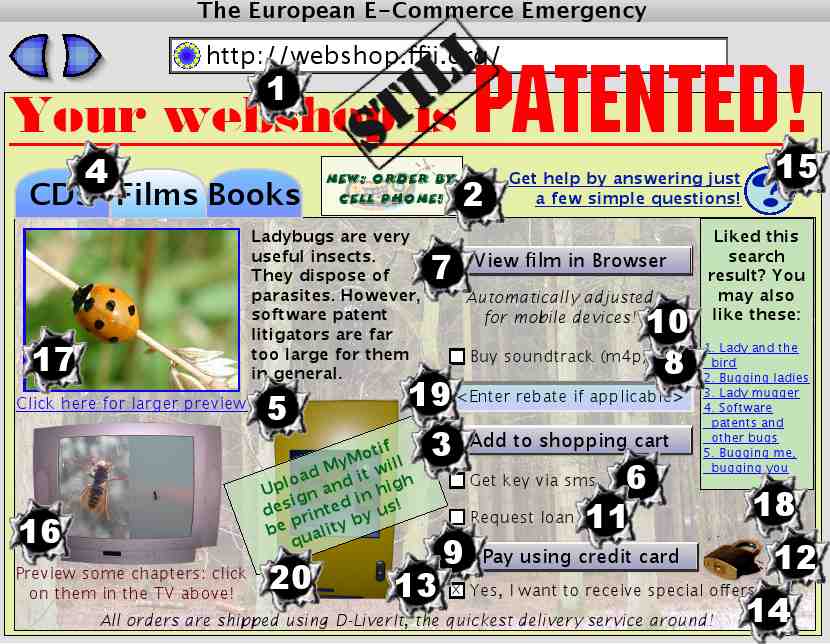 All of the elements and processes indicated in the graphic above are covered by granted (not just requested) European Patents. These patents would have been rendered legally enforceable by the soft patent directive which the European Parliament managed to reject in 2005, as a result og the awareness raising from Eurolinux, the FFII and concerned software professionals from all over Europe. However, the still unresolved legal uncertainty has recently allowed some companies to enforce soft patents in Europe. New projects of European institutions are underway to create a centralized patent court that would decide case law favorable to soft patentability.

Patent regimes dilute our ownership of our commercial assets, our web applications and sites. So while copyright protects the fruits of our work, patents take them away and protect empty talk of others. ‘Inventors’ may author patent applications without any skills in software and business development. Most patents in our field are extraordinary trivial. Contrary to popular belief it does not stem from sloppy patent examination but subject matter. General business ideas or software conceptions are not scarce in any way. Soft patents don’t impress us and we do not care who first came up with them. Entrepreneurs who transform common visions into great products and commercial success earn our respect.

A patent portfolio is a powerful tool for an established player to fence out an emerging competitor and delay creative destruction of its market. Patent trolls will extort you once you succeed commercially. As a consequence of legal ambushes more and more innovators stay away from a ‘mined’ innovative market. Do we need patents for defense then? At least against trolls patents are barely useless. They do not sell any product which could infringe upon our patent. When we commercially fail a troll will obtain our ‘defensive’ patents and sue competitors.

Software patents don’t impress you at all? You embrace open competition for the best solution, in terms of commerce or technology? You don’t fear sharing and imitation but legal minefields? Join us and make a difference.