Today I was installing VMware vSphere ESXi 4.1 at some brand new BL460 G7’s.. after creating a new array I started the installation, after F11 to “Accept and continue” I received this error message: 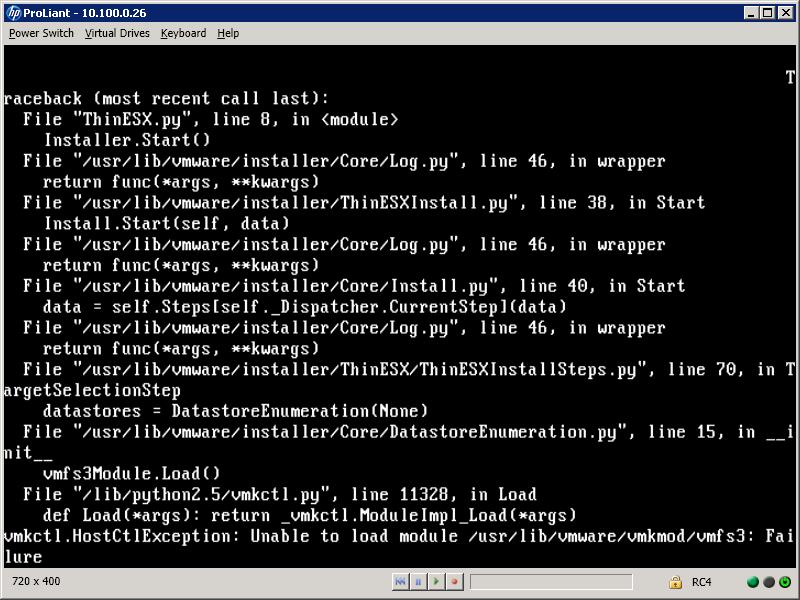 To resolve this issue, download the ESXi 4.1 HP build from HP at https://h20392.www2.hp.com/portal/swdepot/displayProductInfo.do?productNumber=HPVM06.

After I Installed the HP version (always recommended but this customer installed the other hosts with the original installer) the setup completed!

The Broadcom bnx2x VMware ESX Driver Version 1.54 does not function with HP Virtual Connect Device Control Channel (DCC) and SmartLink features on ProLiant and Integrity server blades configured with the NC532m or the NC532i adapter running firmware version 2.2.6. After installing or upgrading VMware ESX/ESXi 4.1 the following functionality is either not installed or is lost:

Any ProLiant and Integrity server blade with Virtual Connect Version 2.30 (or later) and configured with the NC532m or NC532i adapter firmware version 2.2.6. after installing VMware ESX/ESXi 4.1 with the Broadcom bnx2x VMware ESX Driver Versions 1.54.

The VMware ESX/ESXi 4.1 Driver CD for Broadcom NetXtreme II Network/iSCSI Driver Version 1.62 (or later) addresses support for DCC and SmartLink capabilities in Virtual Connect on ProLiant server blades. However, the latest recommendation is to use Version 1.70.34.v50.1 (or later), which is available on the VMware website:

Reconfigure the VMware ESX/ESXi 4.1 NIC teaming failover policies to "Beacon Probing." This modification will remove the dependency on SmartLink to toggle the VM NICs failing link status mapped to a FlexNIC.

There is no workaround that supports the Virtual Connect DCC and SmartLink capabilities with VMware ESX/ESXi 4.1 and the Broadcom bnx2x VMware ESX Driver Version 1.54.

Sander Daems is founder and author of this blog and working as a Lead (Sr.) Consultant by UNICA ICT Solutions. Sander has 15+ years experience in IT, primary focus: virtualization and modern worksplace.